Or if crazy is just crazy.

All I know is I’m kind of pissed and frustrated with myself.

Up until now, I’ve prided myself on writing a blog post every single week, come hell or high water.

Well, I’m not entirely sure what happened.

I wasn’t on some fabulous island getaway or anything fun like that.

The thing is, I had a humorous topic and all these great ideas…

But it just wasn’t coming together.

And I simply refuse to hit publish on something that is total crap.

So here we are.

Chalk it up to exhaustion, mental block, or a temporary lack of motivation.

It happens to the best of us, I suppose.

The sad reality is that there’s no luxury afforded for the nervous breakdown I am perfectly entitled to.

But rather than sit and dwell on this disappointment, let’s take a moment to find the humor in insanity, shall we?

(Truth be told, you’re probably better off not coming along for the ride. But at least you’d be going with someone with a warped sense of humor, so that’s gotta be pretty enticing…)

(It never hurts to have a friendly face on your journey to insanity!) 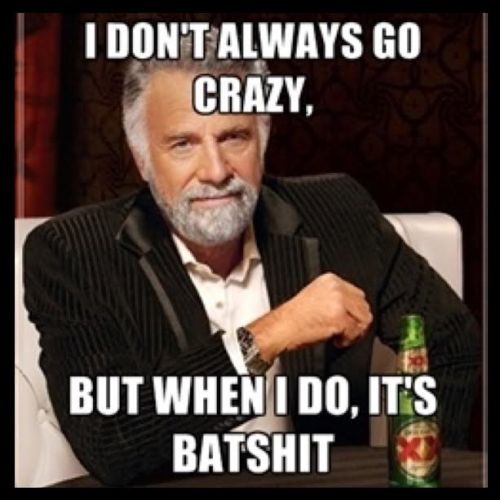 (Hmmm. Is it really that obvious?)

(Losing your mind is one thing. But literally losing control is a far greater issue, as far as I’m concerned.)

(Team work is dream work, or so they say…)

(Discussing your inner crazy with outer crazy is guaranteed to be a fascinating, if not exactly productive, conversation.)

(I can’t decide whether to be envious or to feel pity for such individuals.)

Sure, I may be one step away from going off the deep end some days.

But at least I’m not in straitjacket territory.

Disappointment, overwhelment, and moments of failure are inevitable parts of life.

You get through it and you keep going.

Because that’s just what you do.

So just take a deep breath…

And maybe just a tiny bit crazy, too.

But that’s probably not such a bad thing…

~Happy last Friday of the month! Hope your weekend is crazy… in the very best way possible, of course!~

What could be better than a memorable evening of family fun?

Well, family fun minus most of the family, anyway.

There’s nothing like a bit of quality adult time, where you can sit back and enjoy a drink.

Ever been someplace where the service was so painfully slow that you almost forgot why you left home in the first place?

Welcome to Main Event, a  so-called family entertainment place where you can eat and play!

At least in theory, anyway.

If you ever want to ensure you don’t overindulge in alcohol (or anything else, for that matter), Main Event is the place for you!

At any rate, my husband DJ and I decided it would be nice to take my brother in-law Mike out for a fun night while he was in town.

Main Event seemed like a good idea, and I’d been there many times before with the kids.

But only to play games rather than to eat.

If the comical pairing of bull riding on a 110-inch tv with Lady Gaga blaring over the speakers was any indication, it was undoubtedly going to be a memorable night.

I started off with a Bahama Mama, and DJ ordered beer.

Mike made the mistake of asking our young waitress if they make White Russians.

A little food for thought-

When your waitress asks you what exactly goes into the drink you’re about to order, just remember two things:

I get that mixed drinks can take a few minutes to…

But how long does it take to pour freaking draft beer?

Were these people growing fresh fruit for the cocktails out back?

Painstakingly harvesting wheat for the beer?

Our delightful waitress finally brought our drinks out half an hour later.

Mine might’ve been a Bahama Mama…

But it took so damn long to get there, I couldn’t be sure if that’s what it really was, or just Kool-Aid spiked with a touch of rum.

Mike’s White Russian had a disproportionate amount of vodka.

Could’ve been worse, I suppose.

Hopefully it was the good stuff, at least.

More bang for your buck, right?

Minus any plates, napkins, or utensils.

We stared and stared at the onion rings.

A few moments passed before we redirected our intensely disgusted gazes in the direction of the bartender before DJ got up and demanded plates and napkins.

Our ditzy waitress came over a few minutes later.

Oh, so that’s why you needed plates!

Plates and napkins are somewhat of a necessity when it comes to eating.

Especially in a restaurant, for crying out loud.

Unless you’re a child.

But we didn’t bring the kids, so I was kind of planning to eat like a civilized human being that evening, thank you very much.

A different waitress arrived at our table with a large tray containing our entrées a while later.

And then she looked at the remaining entrée, looked at Mike, looked back at the entrée…

We continued to watch in part curiosity, part horror as she strolled aimlessly from table to table with that hamburger before returning wordlessly to our table.

Perhaps that’s why our drinks had taken so ridiculously long.

Maybe this other waitress had gulped them down.

Then Mike asked for ranch dressing.

We started taking bets on how long it would take for the dressing to materialize.

I contemplated ordering another drink, but then thought better of it.

We were ready to get out of there.

But our waitress was nowhere to be found.

DJ set the timer on his phone to five minutes.

Five minutes until we were going to bolt out of there like a trio of bandits?

Finally, DJ about had it.

He stormed over to the front desk to see if they could be bothered with something so trivial as allowing us the honor of paying for that bizarre dining experience.

Perhaps we should’ve run out of there.

That isn’t something I’d ever done before, nor could I do anything like that in good conscientiousness.

We finally moved on to the games.

I over-enthusiastically whacked some moles.

DJ and Mike played a few intense rounds of Rambo.

Then Mike moved on to a game where he got to repeatedly kick the crap out of a soccer ball.

I think it’s safe to say we all had a tiny bit of pent up aggression from our dining experience.

We all needed a break.

And what we got was a good laugh.

Along with a fairly good idea of where never again to go for dinner.

~Happy Friday, everyone! Hope you’ve had a terrific week, with an even more fabulous weekend on the way!~

Why so sad, little drink? Is it because you’ve been waiting so long to be served that you’re crying tears of condensation? Yeah, me too.

Happy 2nd Anniversary to me!

Way to be subtle, right?

This is milestone is dedicated to YOU, my dear friends.

This one’s for you!

(It’s unquestionably gratitude; that warm, fuzzy feeling of overwhelming gratitude. Either that, or I’m on fire…) 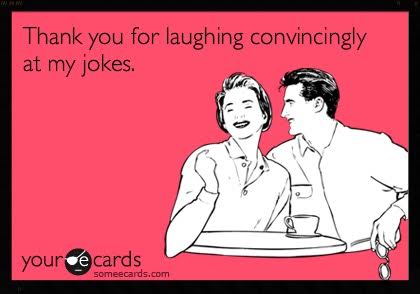 (You guys brighten my day a million times over when my twisted sense of humor brightens your day. It’s true!)

(It takes far too much effort to act not only normal, but in ways that are also socially acceptable. Pftt! Where’s the fun in that?) 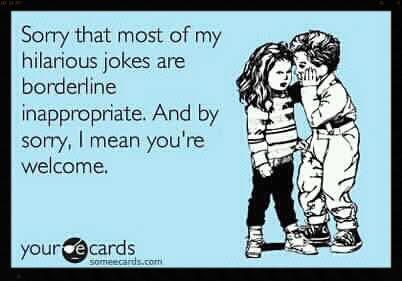 (Ha! This world couldn’t possibly handle that much crazy, and so a “limited edition” I am. On the positive side, I suppose this just makes my writing style that much more, uh…entertaining.)

(This must be why I’m able to make people laugh. Insanity is inherently humorous. Speaking of which…)

(Might as well admit it- you’re probably almost as crazy as I am if you find me even remotely humorous. And that, my friends, makes you amazingly awesome.)

(You- my friends, family, and fellow bloggers- make writing even more enjoyable and rewarding.) 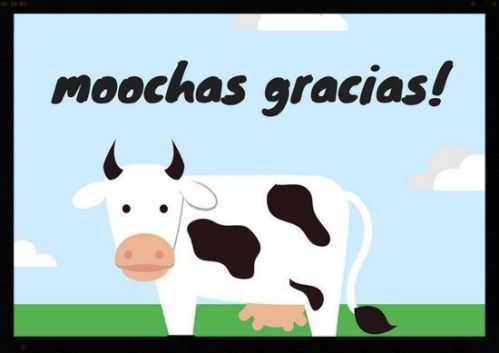 (Because I unwittingly seem to find myself incorporating cows into my writing, what better way to express my gratitude than by saying mooooo-chas gracias!)

Thank you from the bottom of my heart for being a part of Comically Quirky.

I’m honored to be part of such a wonderful community.

~Happy Friday! I hope you all have a wonderful weekend! If you’d like to read my very first post that started all the insanity, please click here.)~