“Thank you for your cooperation.”

I mean, short of bolting off on an attempted high-speed chase.

Which surely would’ve been quickly thwarted by the abundance of farm machinery and construction vehicles that typically dominate the roads out here.

Apparently, going to Walmart wasn’t punishment enough for one day.

I got carded for purchasing canned air as I was checking out.

Little did I know I’d be whipping out my driver’s license again 10 minutes later.

I guess I should’ve stayed home.

“Do you know why I pulled you over today?”

“Oh my God! Is there somebody under my car?”

I did not actually say that.

I merely shook my head no in reply.

I don’t drive on the sidewalks.

I don’t plow over pedestrians.

I keep my vehicle out of cow pastures.

Minutes from home, I’d been driving up and over a teeth-jarring railroad track when I noticed telltale flashing lights in my rearview mirror.

Of course, it would be an unmarked police car.

On a one-lane road.

And no place to turn for at least half a mile.

Nothing but a long stretch of nothingness.

What was I supposed to do?

Pull off the road, into a field of hay barrels?

Preferably one full of disgruntled Longhorns?

So I crept along with those obnoxious lights flashing behind me until I pulled up to an industrial park.

Right between the shift from a 30 mph zone to a 45 mph zone, the officer’s trusty radar gun had clocked me at 43 mph.

Coming down a steep hill, it’s easy to quickly gain speed if you’re not paying  attention.

He asked for my license, but didn’t bother with proof of insurance or registration.

Must’ve had sufficient time to run my plates as he was coasting along behind me, waiting to see if I’d eventually pull over.

I’m sure the motorcycle endorsement on my driver’s license didn’t earn me any brownie points, either.

Sergeant Scowly Dude didn’t look like a guy who believed in giving people the benefit of the doubt and sending them off with a warning.

I’d never, ever gotten a speeding ticket in my life.

Twelve years ago, I had been pulled over at 4:30 in the morning on the way to my final shift of work before maternity leave by an officer who had been pacing me.

At 39 weeks into pregnancy with my younger son, I nearly knocked myself out by hitting my head on the visor when asked for my license, registration, and insurance.

The officer looked on in a mix of sympathy and pity while toy airplanes and diapers flew out of my glove box as I attempted to dig out the requested paperwork.

In all fairness, I hadn’t slept in nine months, which might have been a factor.

For the whole incident.

That kindhearted officer let me off with a warning.

And with a mess of frizzy hair from an unfortunate combination of high humidity and rain, my typical adorableness wasn’t likely to do the trick, either.

This would’ve been a good time to have my charming kids in the car, surely?

Or my sweet, affection dog?

I’m usually sandwiched in traffic between tractors and cement mixers.

Or the occasional runaway cattle who manages to wedge, squeeze, and squish his way through narrow wire fencing to freedom.

And so I consider myself fairly lucky on days where the opportunity allows me to go more than 15 mph behind a bulldozer.

I’ve actually been passed by a semi truck a time or two.

A semi truck, for God’s sake!

I have nothing against cops.

There are countless decent ones out there who do good deeds and give back in immeasurable ways.

At any rate, I’ve been brainstorming less traditional modes of transportation.

Nobody ever gets pulled over on a cow!

At least, not to my knowledge.

Unless, perhaps, by a cop on a galloping horse…

The only problem is, I don’t have a cow.

And I would hate to end up with an even heftier fine, or worse yet, behind bars, for alleged cow-snatching.

Perhaps I ought to find me a Longhorn.

Nobody in their right mind is gonna want to mess with that.

Just strap on a backpack with a skunk inside for extra good measure, and voilà!

As a bonus, fewer suicidal animals would have the opportunity to make me an unwitting accomplice as they attempt to nosedive/hop/slither to their death at the hands (or would it be body?) of my vehicle if I’m not actually in a vehicle.

So there is that.

But I suppose this whole situation could’ve been avoided in the first place if I’d been riding a skunk or an armadillo.

Or if I’d stayed home.

And believe me, I’d be perfectly okay with not going back to Walmart again anytime soon.

~Happy Friday, everyone! Have a great weekend, and drive safely!~

Hint: It’s not actually a ticket (or two) to paradise…

In honor of my one and a half year anniversary of living in No Man’s Land, here’s a brief update on my progression of half-assed assimilation:

Okay, so none of this technically qualifies as progress, per se.

There is a silver lining!

I recently surprised even myself by correctly identifying a lone donkey among a herd of cows.

This is huge. Just ask my realtor.

When my husband and I first came out house-hunting, I had mistaken a donkey for a horse in a nearby field.

To which my realtor responded, “Well, bless your heart!”

Which reminds me- I still don’t care for that phrase.

Don’t think for a moment I don’t “get” that sarcastic and condescending undertone just because I’m a New Yorker/Washingtonian/Arizonan.

Now if all y’all will excuse me, I reckon I need to find me one of them there donkeys and go down yonder.

(Hey, you have to at least give a girl credit for trying!)

Pretty sure this is a donkey…

My neighbors are a bunch of cows.

I’m not even kidding. They truly are cows. There’s no beating around the bush. There’s no other way to describe them. They’re cows, plain and simple.

Cows with spots and a cow with… humps?

Maybe that one is some weird breed of horse. Or donkey.

Almost one year after arriving in No Man’s Land, I still know next to nothing about animals. Or farms. Or anything remotely country-related in general, for that matter.

Except for hay barrels. Those things are fairly self-explanatory. I mean, it’s barrel-shaped hay. Even I can figure that out.

Sadly, the only reason I even know for certain that those animals two blocks down the road from me are actually cows is because I asked my friend Michelle for confirmation.

To add insult to injury, I’m a vegetarian. So not only do I have cows for neighbors, I am also frequently forced to think about these poor cows’ sad existence.

Suffice it to say, I would highly prefer to not think about the fact that I’m driving past a field of somebody’s dinner tonight.

But I always console myself with the knowledge that most people have only “hunted” for their beef in the meat department of their local grocery store.

That makes it a bit easier for me to look these cows in the eyes.

And when I do gaze at the cows, I can’t help but wonder how in the world the notion of milking cows ever came about.

Did some drunken dude wander over to a random cow in the field during the middle of the night, thinking to himself, Hey, I wonder what this here fine animal got in his bladder? Well, don’t matter, ‘cause I’m thirsty, and whatever comes out of it, I’m gonna drink!

I don’t want to think about cows anymore. And after that line of thinking, I’ll never be able to look at them the same way.

Oh, and for the record, I do have real neighbors. They’re very nice, but I think they’re getting tired of being pelted by our stray baseballs while they’re out on their patio relaxing and drinking iced tea.

The cows, for their part, don’t seems to have any complaints. 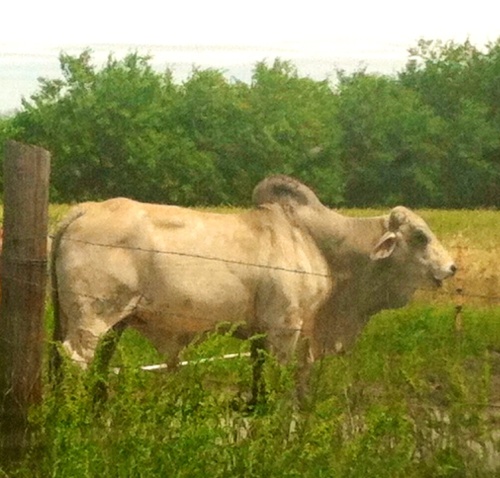 Evidently, this is a cow.