@thebiglybestestdoggie: When life gets challenging, this yoga doggie loves to stretch, mediate, and nap his way to inner peace! Life in the cone hasn’t exactly been a picnic, so I’ve been working hard to find my Zen whenever Momma rolls out this comfy yoga mat. I must say, it seems to be helping! 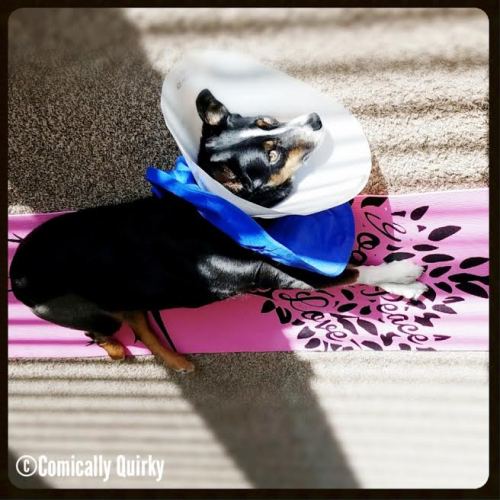 Anyone in the market for a new yoga buddy?

~ Happy Tuesday, friends! We are cautiously optimistic right now- Jett seems to be responding well to the current antibiotics, so fingers (and paws!) crossed for continued progress. Thank you all for cheering him on during this rollercoaster recovery ordeal. ❤ ~

@thebiglybestestdoggie: Lasted a whopping four days without this dreadful cone before landing back at the vet with another infection. Back to hopping around. Back to a bunch of medications. And back into the cone. I’m frustrated. Momma’s frustrated. Paws crossed this is the final bump in the road on my road to recovery…

This nonsense is getting old…

~Hey there, friends. Jett’s recovery process has not been going anywhere near as well as we would have liked. At this rate, we might be on track to setting a Guinness Record for the longest time a doggie has ever spent in a cone… Yikes!~

@thebiglybestestdoggie: Got lots of time on my paws while I work on recovering… so I decided it might be a good time to catch up on some reading. This goofy graphic novel is a real page turner!

If this book suddenly gets boring, guess I can always eat it…

@thebiglybestestdoggie: Just when it seemed I was on the road to recovery, woke up one morning and realized something wasn’t right. All the progress made since surgery seemed to have disappeared, and I was in a lot of pain.  Went back to the doctor, and discovered I had developed an infection. Looks like I’ll be wearing this cone for a while…

One step forward, two steps back…

~Hey, friends. Jett’s recovery process has been nothing short of frustrating and challenging, but here’s to hoping for better days ahead. Hope you are all doing well. We’ve missed you!~

@thebiglybestestdoggie: OMG! OMG! Momma coned the kid too! Wait, what? He’s willingly wearing that thing?  In support of me?? Oh, that’s really sweet…

Whoa! What the heck just happened?

~Happy Tuesday, friends! Jett continues to improve a little more each day… and with any luck, he’ll be free from his stylish blue cone in just a few more days. Woo hoo!~

@thebiglybestestdoggie: Surgery went well. It was very rough at first, but I am slowly feeling a little better each day. Momma was so happy to see me finally smile again for the first time since last Thursday!

Heeeeyyy! Look at me being all cute and silly!

~Thank you, friends, for all your well wishes and positive thoughts. We are so grateful for you all. 💜~

@thebiglybestestdoggie: Our air conditioner quit working. Momma’s car is refusing to start.  Daddy’s motorcycle is out of whack. And the refrigerator sounds like an aircraft preparing for takeoff. You know, I’m suddenly even more grateful than usual to be a doggie instead of a human. Yeesh! 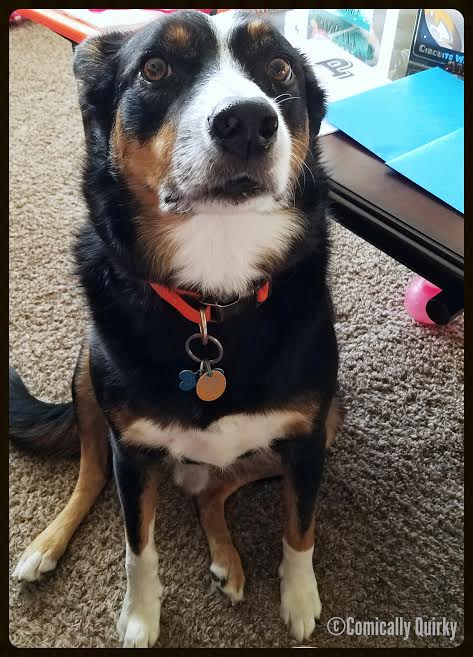 I got 99 problems, but being a human ain’t one…

What do you mean, game over?!?

Oh, it’s not like I’m lacking for things to do.

Quite the opposite, actually.

But you’d never know it with the way I’ve been procrastinating.

I’ve got laundry to sort through.

A dishwasher to empty.

And an assortment of other tasks I’m legitimately forgetting…

Or choose to forget about.

It’s been raining every single day this week.

No sun + tons of rain = no motivation.

I’m behind on everything.

So why not take a break and play a round of Candy Crush?

Or maybe a few hundred rounds, while I’m at it.

I don’t know whether to be proud or ashamed for allowing myself to get sucked into such a major time drain.

But look at all those pretty colors!

Besides, the game’s claim of “swiping stress away” is too appealing to pass up.

For two hours only!

It’s rather unfortunate that domestic pursuits don’t motivate me more.

The curse of being an Undomestic Goddess.

And every level successfully completed rewards me with a declaration of Fantastical!

Which should, theoretically, make me feel good about myself.

Except for the fact that I can’t help but question the actual existence of any such word.

When all five of my lives are used up, it’s time to do…

Well, whatever it is I’m supposed to be doing that I clearly would rather not be doing.

Sure, I could buy more lives.

The offer to buy a little extra “help” is just not that appealing.

I’m not necessarily arguing the fact that I need help.

But my guess is that isn’t the kind of help I probably need.

But I do still have a few on my Kindle.

I’ve been reading the same page of the same book over and over for the last two weeks on that very Kindle.

And Candy Crush was just kind of there…

But I can play for hours on something that’s meant to be played in short bursts.

Suffice it to say, my priorities are sorely lacking lately.

But I did manage to put up Halloween decorations.

And I also walked the dog during a lull from the rain.

So I managed to do something productive.

Oh, and I also scraped a sticky, melted wad of cherry Starburst out of the dryer.

I may not excel at domestic things.

But at least my problem solving skills are still intact.

Maybe Candy Crush is good for something, after all… 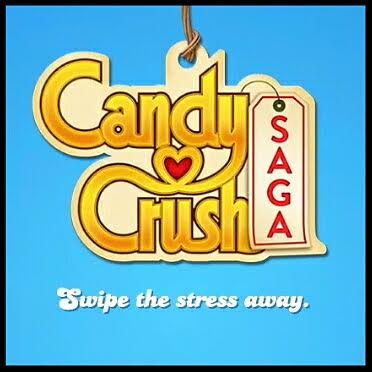 Swipe the stress away, huh? It’s not like I was doing anything productive, anyway…

Is it over yet?

It’s quite the production in The Lone Star State.

Even people without kids religiously attend every Friday night.

It’s that big a thing out here.

Hell, there’s even a 10 billion member marching band at every single game.

And the marching band is typically more fun to watch than the actual football game itself.

Sort of like the halftime show during The Super Bowl.

At eight dollars a ticket for the privilege of sitting on rock-hard metal bleachers for three to four hours, watching the clock move in slower motion than logically possible…

How could it be anything but exciting?

I personally pass the time alternately playing on my phone, staring in disbelief at my watch, and glancing at the score board.

But I’m sure some people are actually watching the game.

What better way to spend a Friday night?

I mean, besides sleeping.

Never mind the fact that I have to get up at 3 am the next morning for work.

If I’m having such a blast, why do I keep going to these games, you might wonder?

Well, to support my amazing mascot, of course!

But at eight dollars a ticket…

I could go see a movie for that price.

Or at buy a great cocktail.

Especially after sitting on those sadistic ass-numbing, back-breaking bleachers.

Sure, it’d be more cost-effective to stay home in my pajamas, watching reruns on Netflix.

But I suppose it beats sitting at home.

Especially when things get really exciting.

Between evacuations, stampedes, and near-electrocutions, it has been a fairly exciting season so far.

Almost every home game has kicked off with a lightning evacuation.

During the very first quarter.

Which is especially thrilling when lightning menacingly illuminates the sky and rain comes pouring down in an attempt to recreate Noah’s Ark, right there in the middle of the football field.

The bleachers are at full capacity.

Because everyone in town is at the game.

Did I mention the bleachers are metal?

Which is ever-so-slightly concerning.

I don’t know about you, but I don’t enjoy high school football games enough to risk electrocution.

And so the stampedes begin.

Which is a rather refreshing break from some of those obnoxious, screeching, know-it-all fans.

Perhaps this is why I never bothered to attend any games when I was in high school.

Nothing against school sports and all the good qualities they help foster.

But sometimes I wonder why I pay to get hit in the head with rogue balls at games where excessively vocal away team fans conduct themselves as though the home team had the audacity to cross into Oakland Raiders territory.

The things we do for our children.

We support our kids.

Even when it risks our last remaining thread of sanity.

Because our kids will always remember that we were there for them.

Especially if we embarrass the hell out of them with our mere presence.

Because embarrassment and support apparently go hand in hand.

Some days, we just need an extra dose of humor to compensate for life’s crappy challenges.

Hell, even some months…

So here’s a bit of humorous inspiration for anyone who could use a little boost right about now.

(Have you ever seen a sad Cookie Monster? Case in point. Now go eat a cookie and cheer up.)

(If you believe passionately enough, you might soar higher than you ever thought possible! But you might want to put on a cape first, just to be on the safe side…)

(Much like the brain, utilizing one’s entire ass is twice as impactful as using half of it. It’s gotta be all ass or no ass. There’s no in between. Speaking of asses…)

(Butt prints are sooo unflattering. So get up and make amazing things happen!)

(If you do nothing else today, do this one little thing. Talk about an adrenalizing mood booster!)

(I’ll be the first to admit, I hate to lose. Hate, hate, hate it. This is where having a warped sense of humor comes in handy.)

(To quote the great Homer Simpson, “Shut up brain, or I’ll stab you with a Q-tip!”) 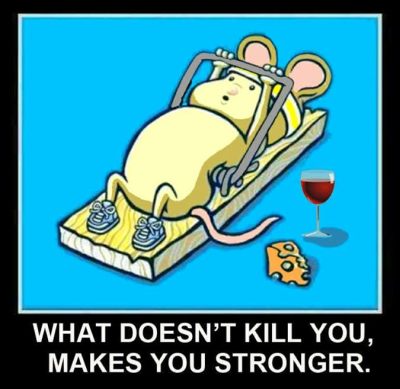 (But seriously, it can kill you if you’re not careful. So be smart and use your brain. You know, the same one you just stabbed with a Q-tip. Whoops!) 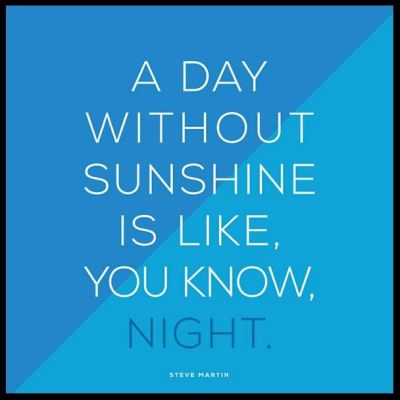 (Plants need sunlight to thrive and grow. So do human beings. Without sunlight, we wither like shriveled prunes. So step outside and get your daily dose of mood boosting vitamin D.) 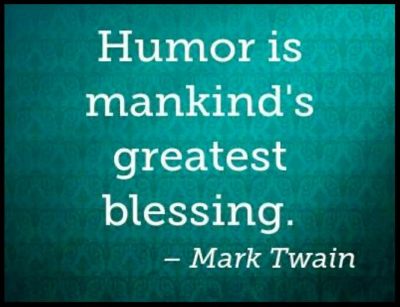 (If all else fails, always remember this one thing: you’re awesome. Because I said so. Enough said.)

~Have a great weekend, friends! Smile, laugh, and always look for that elusive silver lining.~