And he’s unquestionably my favorite brother.

This may be largely due to a technicality, but I’m pretty sure it still counts.

It’s sort of a process of elimination by default.

But I have to admit, it sure makes it easier when you only have one sibling to choose from.

It’s about to big a huge milestone birthday for this favorite brother of mine.

And with that said…

He is every bit as unique as his name.

But then, it’s not like anyone in my family is capable of doing normal very well.

He and I are obviously related.

Despite the fact he used to try to convince me I’d been adopted.

(News flash: We look far too much alike for that to have been true. So there!)

Sure, he’s more than a whole foot taller than me.

(He enjoys teasing me about how I’d clearly stunted my growth by becoming a vegetarian at too young an age.)

And we’re both funny.

(His favorite word is haha.)

At least, I think I’m funny.

I must be pretty funny, because he’ll typically reply to my texts with one of three responses:

He’s got a delightfully dry sense of humor, but he truly is a man of few words.

For this reason, we tend to text far more frequently than we talk on the phone.

Whenever we do have an actual phone conversation, he’ll mutter an occasional word here and there.

Which helps reassure me he didn’t get eaten alive by his feisty dog mid-conversation.

And then he’ll proceed to breathe intermittently into the phone like Darth Vader.

Some people just don’t know when to shut up.

Growing up, he was paradoxically my best pal…

Thanks to my favorite brother, I learned how to swim.

I learned to swim because he’d otherwise have kept trying to drown me in our backyard pool.

For fun, of course.

Because this, apparently, is what bored children do to keep themselves entertained.

(Note to parents: Think carefully before you send your kids outside with painfully vague instructions, like “Go find something to do”. Nothing good ever comes out of this.)

We’d make the most of our excruciatingly short pool season in New York by excitedly jumping in as soon as the pool temperature warmed up to a bone-chilling 59 degrees.

Hey, it seemed like a totally bright at the time.

But this may well be one factor in why there are clearly some things wrong with us.

He also got me permanently banned before I’d ever had the chance to play an instrument.

My parents made the fatal error of allowing him to play a trombone in the school band.

He wasn’t exactly what one might call a natural.

The odds of him winning a medal for his performance weren’t sounding very favorable.

And I suspect I wasn’t the only one who’d felt that way.

A year or so later, we ended up selling that trombone to the first person who showed up at our garage sale, just to make it go away.

But alas, so started my future path to choir.

And then there’s what I affectionately call Dante’s Shop of Horrors.

He used to set up shop in his bedroom, with an assortment of toys, stuffed animals, and other goodies on display, in an attempt to make a few quick bucks.

Did I mention most of the items in his shop already belonged to me?

But I’d always feel sorry for him, and so I’d end up buying my own crap back out of pity.

After all, the boy had a real hunger for life.

He’d count his earnings and walk to the store to stock up on more crap.

Including an assortment of treats, like dozens of those cheap apple pies that contained no real apples.

But then he would always surprise me with cute little stuffed animals he’d won from the claw machine.

Which made up for a lot.

Like when he’d change the channel on the one tv in the house and kill my few remaining brain cells with never-ending marathons of Beavis and Butthead.

(Those brain cells have yet to return.)

Or when he’d blare Metallica’s Enter Sandman on repeat, shaking and rattling the house all odd hours of the night until the vibrating floor would eventually lull me to sleep.

(I’ve known every word of that song by heart since 7th grade.)

But I think of him affectionately whenever I hear She’s a Maniac.

(It’s one of his favorites.)

And whenever I hear Journey’s Any Way You Want It, I can’t help bursting out in laughter.

(I still can’t figure out why he hates that one with such passion.)

I can’t help myself.

I always crank that one up and sing along at the top of my lungs whenever it comes on the radio.

I wonder if, subconsciously, I like that one only because I know it annoys the hell out of him.

Anyway, I’ll leave you all with this wonderful picture of baby me playing nicely with my big brother.

(And just to be clear, I was sooo not adopted.)

~Happy Friday, friends! Hope you all have a fantastic weekend!~ 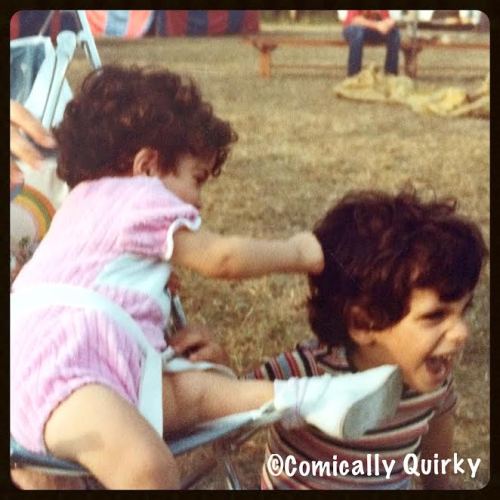 Don’t feel too bad for him. He probably started it…