With my oldest son’s recent birthday, it’s fair to say I’ve been reminiscing a tiny bit.

Especially after rummaging through both of my boys’ baby boxes yesterday afternoon.

Sure, it’s been 15 years since I first became a mom.

But one question still lingers:

How the hell was I ever allowed to leave the hospital with a small, helpless, living human being in the first place?

Did I look like I had any clue as to what I was doing?

If I did, it must’ve explicitly been the pain medication talking.

Would you believe I’d actually packed an Eeyore rattle toy in my hospital bag?

In case my newborn child wanted to play, I reasoned.

Oh, and I’d also brought along a book.

You know, for the downtime following that whole childbirth drama.

Clearly, I was delusional from the very start.

Sure, I’d skimmed through the suggested reading material on pregnancy and babies and all that fun stuff.

But really, how hard could it be?

Did I mention I had zero experience?

Seriously, not an ounce.

I had no younger siblings.

I mean, I worked in a toy store for a brief stint when I was in high school.

But that only served to reinforce the fact that I surely wasn’t a fan of screeching, demanding, whining little monsters.

And so my baby was the first baby I’d ever held.

What was I doing?

How was I expected to be responsible for such a tiny little human being when my ability to take care of myself was likely questionable?

My husband and I were practically kids with a kid, really.

The baby is awake?

Why is he awake?

What am I supposed to do?

How much is he supposed to eat?

Is he eating enough?

Is he ever going to stop eating?

Why won’t he sleep?

Why is he still asleep?

Why won’t he go back to sleep?

Why won’t he stop crying?

Does he hate me?

My baby hates me.

I’m the worst mommy in the world!

Oh, I’d read What to Expect When You’re Expecting.

And then I read What to Expect the First Year.

No other book series can make a person feel like such an epic failure so quickly.

Even if the baby was only a mere twelve days old.

If anything, those books made me a nervous wreck.

I was convinced I’d be going through my child’s life as a sleep deprived, anxiety-ridden zombie.

A zombie who’d inevitably make all the worst choices, and ultimately screw up her child’s entire life because of said sleep deprivation.

So I stopped reading.

So what if my baby preferred sleeping in his car seat over using the nice bassinet we’d bought him?

So what if I wasn’t dragging him out on stimulating play dates at three months old?

So what if he liked to shove Mega Blocks in his mouth when nobody was looking?

So what if I secretly hoped he wouldn’t eat all of his of delicious banana baby food so that I could finish it off?

I had relatively little idea of what I was doing.

But I had lots of love.

We’ve managed to survive, so that’s gotta count for something.

In spite of all the sleepless nights.

I’ve never been one who could thrive on broken sleep.

It makes me scary.

But you know you’d reached a whole new level of exhaustion when you watch Plaza Sesamo halfway through at 2 o’clock in the morning before realizing that it isn’t actually Sesame Street.

And that it was entirely in Spanish.

No wonder nothing made sense.

But the good news is a person can eventually adapt to existing in a zombie-like trance.

I do sometimes marvel at how we’ve managed to make it this far in life.

And all things considered, I think we’re all turning out A-OK.

From day one, these boys of mine have been teaching me more than I could ever possibly teach them.

And that’s saying a lot.

Motherhood is the biggest, scariest, most rewarding roller coaster ride of my life.

And I am happy and honored to be on this magically maddening adventure.

Even if it makes me crazier than I already was in the first place.

It’s totally worth it.

~Happy last Friday of the month! Hope you guys all have a terrific weekend!~ 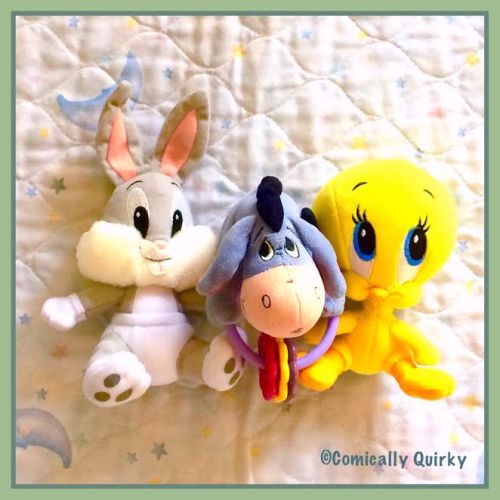 That Eeyore rattle in the middle? I honestly wasn’t joking when I said I’d packed him in my hospital bag. Yeah. Let that sink in for a moment.

32 thoughts on “The Madness of Momming”